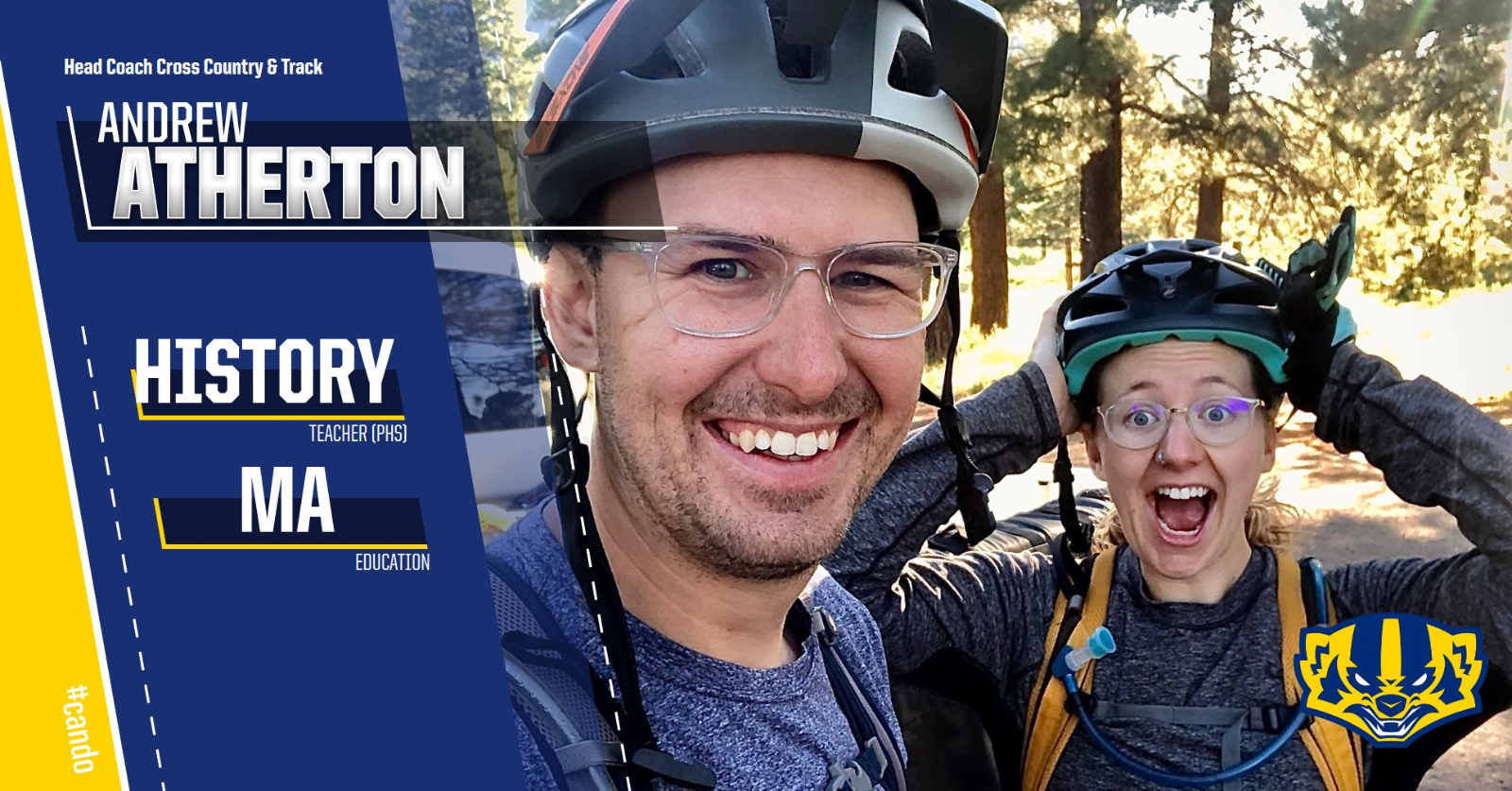 Coach Andrew Atherton graduated from Bradshaw Mountain High School in 2010.  We often tease him about being a Bear but he wears Blue and Gold now.  While in high school, he participated in cross country, basketball, and track.  His favorite memories of high school sports “were the days that I pushed myself to the absolute limit. When I got home from practice and had to wait at the bottom of the stairs to get to the front door because I gave it my all. There is something so rewarding about that feeling.”

After high school Coach Atherton went to Northern Arizona University where he obtained his Bachelors in Business Administration and Marketing Communication.  After a few years in the Business world, Coach Atherton decided he wanted to get his teaching degree and teach History, so he ended up at the  University of Phoenix where he received his Masters in Education.

Coach Atherton came to Prescott High School in 2019 after getting hired to teach in the social studies department.  He was here less than a semester before we had him helping coach our Cross Country and Track teams.  In 2020, we hired Coach Atherton to be one of our head coaches for cross country and track.  Coach says his favorite thing about coaching at PHS is, “the relationships I have bult with the athletes is by far my favorite part of coaching! We are lucky to work with some of the best students and athletes in the state, that not only shine in their education but as people.”

Coach Atherton is married to Amanda “Mandy” Atherton who also works as a math teacher at PHS.  They have a dog named Luna who is a rescue from the reservation. They quickly found out, she is not a runner, unlike the rest of the family.  The Atherton’s love being outdoors and most days you can find them mountain biking, rock climbing, bike packing, backpacking or anything else that has fresh air and adventure!  Something that many might not know about Coach Atherton is that he has more college credits in science than any other subject.  He went till his Junior year of NAU as an exercise science major but, alas, organic chemistry was his downfall.  He switched to a Marketing degree for no reason except it sounded interesting. Then he ended up getting his masters to become a history teacher.  He firmly believes that”iIf you ever think you only have one choice of what you want to be in life, it’s a lie!”

We love having Coach Atherton in the Athletic Department and believe that we are lucky to have such a care-free, gregarious coach who puts his athletes and students first.  Thank you Coach!