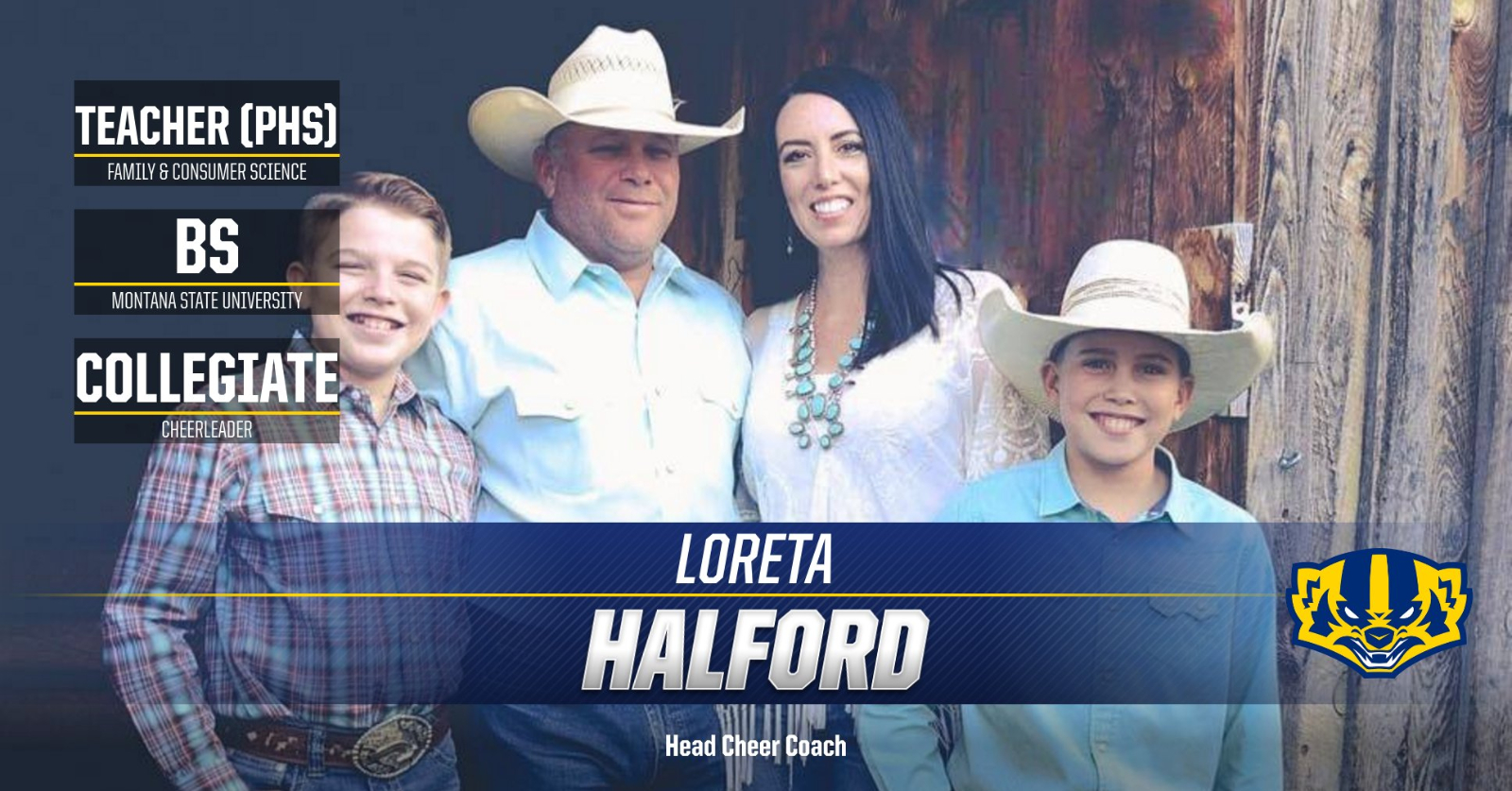 Coach Loreta Halford graduated from Roundup High School in Roundup, Montana in 1997.  While a student at Roundup Coach Halford participated in cheer and track. Coach Halford’s favorite memory of high school was, “Growing up in my small town everyone played sports or was involved in some capacity. The band, cheerleaders, players, teachers, and students would all travel together to all the games and activities. Tournaments were weekend trips to the big city. Our entire school was one big happy family when it came to sports.”

After high school Coach Halford attended Northwest College in Powell, Wyoming while at Northwest, she was a cheerleader where she met many of her life long friends while cheering. After receiving her Associates of Science degree in Family and Consumer Sciences, Halford then went on to Montana State University-Bozeman, where she received her Bachelor’s Degree in Health and Human Development; Family and Consumer Sciences Education. All through college Coach Halford was involved with the new GPS mapping systems. She worked for the Wyoming National Parks and Montana State University mapping noxious weeds, abandoned mines, and roads.

After college Coach Halford moved to Arizona where she worked for Catholic Social Services as a Parent Aide. She then applied for her dream job at Prescott High School and was hired on in 2004 as the new Family and Consumer Sciences teacher.  She has been a teacher here ever since!  Coach Halford was hired to be the head cheer coach in 2013.  She states that her favorite thing about coaching at Prescott is, “I love being involved with PHS outside of the classroom. Watching the games and being witness to the great things students are doing beyond the four walls of class.”

Coach Halford is married to her husband Clint Halford who is a 4th generation Prescott native, PHS alumni and works in the Heavy Equipment Construction Industry. They have two boys Reno and Brody who both attend schools in PUSD. They are involved in 4-H and Hockey respectively.  As one might imagine, Halford is an amazing DIY-er by nature. She loves finding junk and giving it new life. Her current projects are a 1974 2-horse trailer and reupholstering her great grandmother’s old chair.  If you haven’t seen some of her past projects, you should ask her, they are quite impressive.

One thing many people don’t know about Coach Halford is that she was born on the Blackfoot Indian Reservation in Northern Montana.  According to her, “the most beautiful place on earth!”   Another thing is that she was extremely shy growing up. As a sophomore in high school she told her mother, ” I wanted to try out for cheerleading.” Her response was, “You know you will have to stand in front of a lot of people and talk right?” I grew to love the sport as well as the challenge of getting outside of my comfort zone.  And we are glad she did, as she is a wonderful teacher, coach, and mentor to many of our students and student athletes at Prescott High School. Thank you Coach Halford for your dedication to our school and community!